The highlights this week: Latin American female politicians saved lives and designed gender-conscious stimulus policies during the coronavirus pandemic, Chile ups public lands devoted to renewable energy, and the road ahead after an abrupt pause in U.S.-Guatemala anti-graft cooperation.

If you would like to receive Latin America Brief in your inbox every Friday, please sign up here.

COVID-19 hit Latin America at a moment when all of its elected presidents were men. However, thanks in part to the region’s widespread quota policies to increase women’s ranks in politics, the number of women in lower houses of federal legislatures—31.6 percent—was slightly higher than the global average of 24.5. In some countries, female lawmakers are just as or more common at the state and city levels.

A year and a half into the pandemic, data is emerging about how some of these female leaders governed their responses differently than their male counterparts did, both at the city and federal levels. A groundbreaking study of around 700 Brazilian municipalities found that those with female mayors had, on average, at least 37 percent fewer COVID-19 deaths per capita than those with male mayors.

Measuring the gender effect. While some studies have described correlations between female leaders and better COVID-19 management, the authors of the Brazilian study, which is still under peer review, believe it is the first to establish a causal relationship. To simulate a controlled experiment, the authors—economists who hail from the University of São Paulo, Insper, and the University of Barcelona—selected cities of similar sizes that had tight elections between male and female candidates in 2016 and then compared those that elected men versus women, controlling for other factors.

Along with seeing fewer of their constituents die from COVID-19, female mayors were found to have implemented non-drug interventions like mask-wearing and social distancing requirements more than their male counterparts did. The researchers could not explain those actions according to mayors’ political ideologies or levels of education, concluding that they appeared to be related to less observable characteristics, such as being risk-averse.

Little scientific research has been done on the role of women as policymakers in times of crisis, they wrote, though studies from India, Italy, and China have found that corruption is less intense among female leaders.

Stimulus policy reinvented. In Argentina, a group of female policymakers sit in the upper ranks of the federal government, where they shape budget and policy proposals in addition to holding workshops for regional officials on addressing the gender gap through economic policy. This has resulted in a suite of federal COVID-19 recovery policies that do the same.

Such a focus is sorely needed, officials at the United Nations have pointed out. In Latin America, 30 percent more women than men left the labor market entirely in 2020, for reasons including increased responsibility to care for family members, according to the U.N. Economic Commission for Latin America and the Caribbean (ECLAC). Reactivating the region’s economies requires reactivating these women as workers and spenders.

In Argentina, the government’s pandemic response last year included broadening cash benefits to low-income households with children and including domestic workers in emergency payments. As part of its stimulus package, Buenos Aires has created incentives for companies hiring women in lines of work that are among the first to bounce back as the economy recovers, particularly in sectors that are overwhelmingly male—such as civil construction, engineering, and energy. It is also building hundreds of public day care centers. In total, 55 policies, representing 15.2 percent of Argentina’s 2021 budget, could contribute to closing gender gaps, according to Ministry of Economy officials.

“An economic policy with a gender perspective is good for the macroeconomy,” economist and deputy cabinet chief Cecilia Todesca said at a recent event.

Multilateral organizations and policymakers elsewhere in the region are sounding the same note. Some Mexican officials are studying the possibility of implementing a national care work system that could include public centers for children and older people, and Chile has offered companies a subsidy for hiring women amid the economic recovery. ECLAC has released a suite of policy recommendations, and the International Labour Organization is working with Argentina on a manual for any country to design a gender-conscious recovery.

An entirely new rulebook. Perhaps the most revolutionary way that female Latin American policymakers will leave their mark during the pandemic is by rewriting Chile’s constitution. A significant focus on gender equality is expected from the constituent assembly, which is half female and elected an Indigenous woman as president.

The new constitution “will be designed from a point of view that is indissociable from the feminist agenda,” the social scientist Beatriz Della Costa wrote in Folha de São Paulo.

Della Costa coordinated a study that interviewed about 96 Latin American female policymakers in 2019 and 2020. Looking at policymakers from different countries and different political strains, the researchers identified several qualities that repeatedly appeared in the women’s governing styles, including a focus on reducing inequalities, a direct connection to civil society, a collaborative decision-making process, and a willingness to engage in dialogue and cross party lines.

Sunday, Aug. 1: Mexico holds a referendum asking if former presidents should be prosecuted.

Wednesday, Aug. 4: The Central Bank of Brazil issues a decision on interest rates.


An aerial view of the Quilapilún photovoltaic plant in Colina, Chile, on Aug. 20, 2019.MARTIN BERNETTI/AFP via Getty Images

Chile’s renewables push. Chile announced that, by the end of the year, it plans to grant tenders for renewable energy production on at least 200 square kilometers (or over 78 square miles) of public land in its northern Antofagasta region, which could generate 2 gigawatts of energy capacity. More than 40 percent of Chile’s renewable capacity is on public land.

Mexican methane. A new report by the Environmental Defense Fund found what researchers called an alarmingly high methane leak rate in Mexico’s oil and gas industry: Around 4.7 percent of methane produced is released into the atmosphere. A lead researcher said cutting those emissions in half would have the same climate benefit over 20 years as removing one-third of the country’s passenger cars from the road.

Sputnik V woes. Though nine Latin American countries ordered Russia’s Sputnik V coronavirus shot after a flurry of vaccine diplomacy, lags in delivery have been widespread. Six countries have publicly complained about the delays, with Panama canceling its contract altogether and Argentina threatening to do the same. While Russian manufacturers have said that they will deliver the doses as planned, Buenos Aires has turned to new contracts with Pfizer and Moderna, as other countries seek a range of alternative suppliers.

Attempts to hamper Haiti probe. Haitian officials investigating the July 7 assassination of President Jovenel Moïse have received death threats—and have even been barred from entering the crime scene and seeing security camera footage, according to a CNN report. More than two weeks after the killing, no charges against any of the over two dozen detained suspects had been formally announced, and police have declined to comment on whether the detainees have access to lawyers.

Diasporas at the Olympics. Cuban athletes at the Tokyo Olympics are a boxing, handball-playing piece of evidence of the exodus from the island over the years. By the Cuban sports journalist Francys Romero’s count, more than 20 athletes at the Olympics were born in Cuba but became naturalized in and are now playing for other countries. That’s a group almost one-third the size of Cuba’s own delegation.

Latin American street protests since 2019 have targeted prominent public statues of colonizers and enslavers, part of a renewed effort to call into question the region’s social hierarchies. One such statue was set on fire this week. Where? 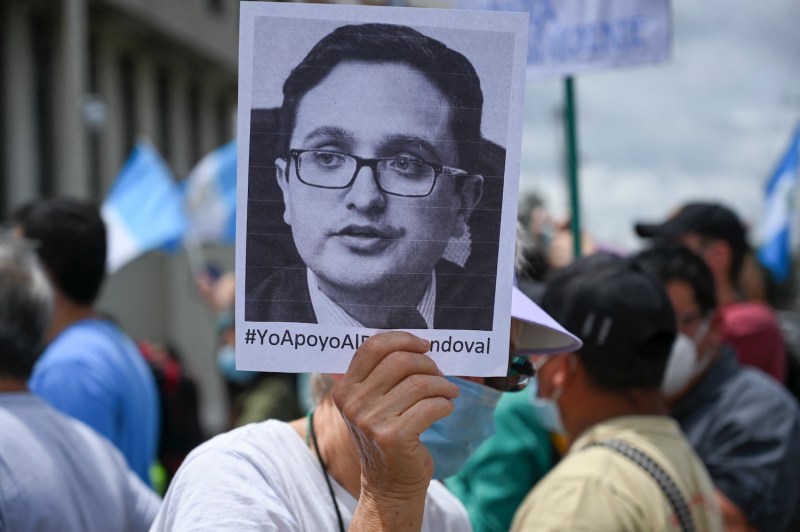 A demonstrator holds a portrait of the dismissed Guatemalan anti-corruption prosecutor Juan Francisco Sandoval during a protest in Guatemala City on July 24.JOHAN ORDONEZ/AFP via Getty Images

On Friday, the office of Guatemala’s attorney general fired the leading anti-corruption prosecutor Juan Francisco Sandoval on vague allegations of “abuse.” Sandoval then fled the country in fear that he would face arrest under politically motivated charges—a fate that he says has befallen several of his fellow anti-corruption advocates.

In a dramatic reversal, the United States then suspended cooperation with the attorney general’s office—only two months after Vice President Kamala Harris launched the initiative on her visit to Guatemala, when she praised the country as a key anti-corruption partner in the region.

What Sandoval was investigating. In an interview to El Faro on Friday, Sandoval said his supervisor, Attorney General Consuelo Porras, had become increasingly uneasy with his investigations into possible corruption regarding money disbursed for pandemic response purposes, which could implicate President Alejandro Giammattei. He described Porras’s office as being in “complete submission” to the presidency.

Sandoval’s anti-graft unit within the attorney general’s office was the last such unit remaining in the country after former President Jimmy Morales shut down the United Nations-backed International Commission Against Impunity in Guatemala (CICIG) in 2019. Echoing the public outcry that followed the shuttering of CICIG, countrywide protests against Sandoval’s firing occurred Thursday.

A recalibrated U.S. approach? The U.S. envoy for El Salvador, Guatemala, and Honduras, Ricardo Zúñiga, said this year that anti-corruption would be the key pillar of U.S. strategy in those countries to reduce the root causes of northward migration. That focus may have its origins in analysis that corruption thwarted some aid efforts during the Obama years.

Some analysts have expressed skepticism that pressure from Washington could really reduce corruption in El Salvador, Guatemala, and Honduras, given their governments’ undeferential attitudes toward the United States. In Foreign Policy, Chatham House’s Christopher Sabatini writes that if improving well-being in other countries is the goal, factors other than corruption are far better understood in terms of achieving it, despite the anti-corruption hype.

For their part, transparency, human rights, and independent media groups in these countries have welcomed the U.S. anti-corruption push. They are still slated to be included in U.S. anti-graft cooperation after the cancellation of funds to the Guatemalan attorney general’s office.

In São Paulo, activists set fire to a statue of Borba Gato, who hunted and enslaved Indigenous Brazilians in the late 17th century. Brazilian history books have often lionized the role of so-called bandeirantes, who expanded the control of colonial authorities.

In a report this week, the Guardian looks at current reckonings with colonial history across the Western Hemisphere, including protesters targeting statues in Chile and Colombia since 2019.